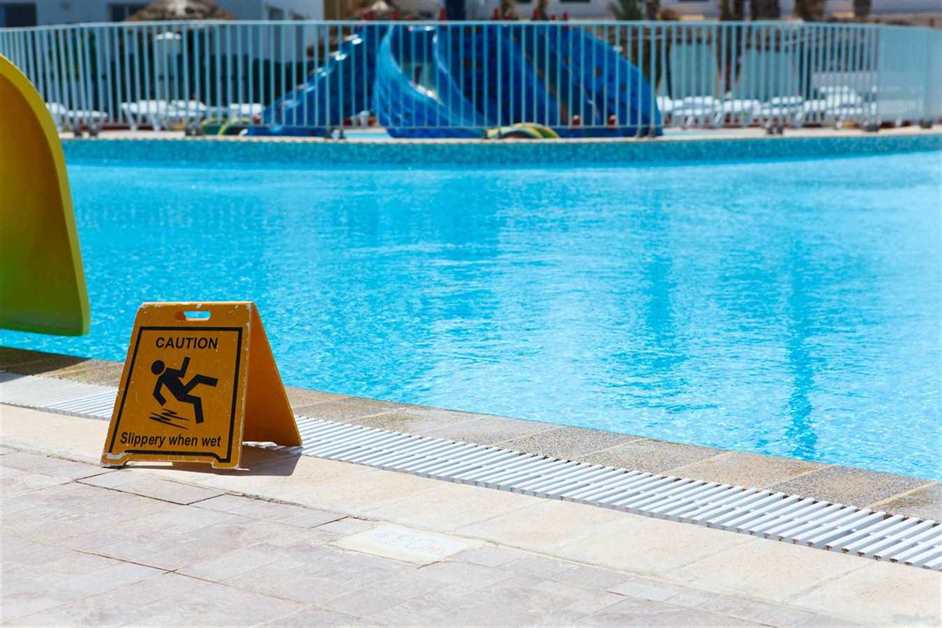 When we’re on surfaces that aren’t properly gripping, we find ourselves slipping and tripping. That’s not an old saying, but it sounds like one, and it might as well be because it’s good advice. Metaphorically, it might mean “when you’re in a situation you don’t have a handle on, you may make avoidable mistakes”; literally, it means tractionless, wet surfaces are an accident waiting to happen. Surfaces near pools tend to be wet, what with all the splashing and water; here are some tips to keep your family safe.

Put signage up around your pool; the sign can be as traditional as those “Caution: Wet Surface” signs, or as cheeky as a DIY sign that says “Hey there’s a pool here the floor around it is probably wet so if you sprint at least aim to fall in the water”. There’s a reason you see these signs in grocery stores trying to dodge liability charges; they’re effective, and sufficient warning means your neighbors probably can’t sue you; it’s worth putting something up!

Fencing is a great idea to keep people from slipping; it discourages sprinting at full speed into the pool and makes it harder for little ones to get access to the water when there’s no one around. As an added perk, it stops lusty teenagers from using your backyard for impromptu midnight pool parties while you’re away! Stray animals are also not keen on fencing; dogs have a hard time climbing it, and deer probably think it’s impassable, so you’ll help our four-legged friends from slipping, too!

Don’t let the area around the pool look like your weird pack-rat uncle’s garage; clear away pool toys, which should be in the water or packed away in a chest or shed. Lazing around the pool in a lawn chair can be fun, but remember that chairs too close to the pool are a tripping hazard for passers-by; that hazard goes double for the person in the chair, who might find themselves swimming unexpectedly after a collision. Try to set up close enough to the pool that you can enjoy your time with the swimmers, but far enough away that you won’t impact the movement of anyone coming in or going out.

Non-slip surfaces are a huge boon for anyone who doesn’t want to be on America’s Funniest Home Videos (which, I recently learned, still airs despite being rendered irrelevant by YouTube). Have you ever passed your hand over a stone, feeling its surfaces, marveling at how it formed? I know that every once and a while, I like to rub a rock or two; that’s handy because Rubaroc might just be the best non-slip surface to contour your pool, combining the durability of rock with the non-slip grip of rubber. You need Rubaroc paving installed by a professional team,  and, surprise surprise: we’re the folks to do it for you! We specialize in pool repair and renovation, so installing safety features is a huge part of our business; we trust this material will keep your family safe, and it feels pretty cool, so get in touch!

Nick H
21:45 04 Dec 19
Time finally came to have work done on the pool and there was only one company I wanted to deal with. Dale, Julie and... the crew made sure I did not regret my decision. New pool liner, Rubaroc, pool pump and sand filter, the back yard has new life. I also have to mention Frank who made sure the sand filter, pool pump and plumbing was installed correctly.read more

James Friesen
19:58 04 Oct 19
Dale and his crew did an amazing job. We had a major pool overhaul done. New liner, put in stairs, put in a new slide,... Rubaroc put all around the pool, new plumbing with filtration system and a UV Filter. He went over everything with us about what was needed to be done and what we did not need done.We had another pool company come down to give us quotes and discuss our needs. The other company said that they would break up all the concrete and re-pour everything. When Dale came down, he said that doing that would be a waste because 90% of our concrete was in great shape. He explained how he would cut out the parts that were breaking up and just pour that fresh concrete where it was needed. This saved us quite a bit of money.Also, we said we wanted a quote for replacing our pool heater as we had a heat pump and wanted to go to gas. Dale looked at our heat pump and recommend that we keep the one we had because it will be a lot cheaper to run and the one we had was a really good heater and is still in great shape. The other company we had down said that they could replace it, no problem, and added about $10,000 onto their quote.Other than that, their quote was very reasonable, they showed up when they said they would and did a great job. They cleaned up everything when they were finished and left the place spotless. There were a couple of days when they fell behind schedule because of rain or storms, but they always called to let us know that they were delayed.Just one word on their filteration system they installed. Amazing. We were blown away by the way it kept the pool free of debris. Our yard is surrounded by trees and normally we use our leaf skimmer net daily. This last summer, I only used it a couple of time, and that was only after a very windy or stormy day.We would definitely use them again in the future and would recommend them to anyone.read more

Suzanne Wiebe
17:15 23 Sep 19
Al and I had a pool liner replacement done on our pool with UV Pools. We are so happy we chose this company. Dale,... Julie and all his team did A1 work in a timely fashion. They are very efficient and knowledgeable. We always felt they had our interest at heart. We have total confidence in them and would definitely recommend them.read more

Wensi Heran
01:32 13 Sep 19
Excellent company! Dale is really professional and cares his customers. I recommend his company to anyone who need to... renovate the pools. Thank you for installing the cover and the heater for us. We enjoy our pool so much this summer.read more

Maya Kotecha
13:04 29 May 19
They replaced our pool liner and added a UV light unit to our system. They were very responsive and professional! I... highly recommend using them. Julie was great to work with.read more

Ron MacLean
01:23 25 Sep 18
We really love our pool renovation, Dale and the team did a fantastic job! We got all new plumbing, heater, sand... filter, UV filtration system,new liner and metal on the walls, winter safety cover, rubberoc, and the list goes on and on. Communication was great, and the renovation was completed basically on time with only a slight delay beyond their control. We cant wait to enjoy our new backyard next summer! We will definitely recommend UV Pools to our friends and family!read more

Keri Joss
14:03 12 Sep 14
We were very happy to find UV Pools and even more impressed after our first encounter with Dale. He was quick to come... out and speak with us, listen to our needs & wants, offer his professional opinions and was quick to respond with detailed quote we could understand. Dale & his crew were equally as professional when it came to getting down to the task at hand with the tear out and re-build of our space. The team was respectful, courteous and available thru the entire project. Quality workmanship and commitment to a quality product was evident. Our pool is amazing! UV Pools were exceptional and we would highly recommend them to anyone.Trevor & Keri Jossread more
Next Reviews